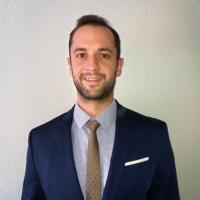 Rubén Sánchez Blázquez received the Bachelor's degree in Industrial Electronics and Automation Engineering, from University Carlos III of Madrid in 2019. In October of that year he began working as a research assistant at the Robotics Lab. Two years later, he received his master's degree in Robotics and Automation from University Carlos III of Madrid.

Additionally, he has participated in national research projects such as HEROITEA (Heterogeneous Intelligent Multi-Robot Team for Assistance of Elderly People) as well as in projects promoted by private entities.