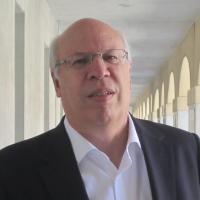 Carlos Balaguer received his Ph.D. in Automation from the Polytechnic University of Madrid (UPM), Spain in 1983. From 1983-1994 he was with the Department of Systems Engineering and Automation of the UPM as Associated Professor. Since 1996, he has been a Full Professor of the Robotics Lab at the University Carlos III of Madrid. He has been Director of the Department of Systems Engineering and Automation (2006-2007) and the vice-Rector for Research of the university in the period of 2007-2015. He is Director of the Master degree in Connected Industry 4.0 (2018-2021).

He is a member of IEEE and IFAC, and former President of IAARC (2001-2004). He participates in the European networks Euron and Clawar. Prof. Balaguer had been also an Associate Editor of IEEE Robotics & Automation magazine (2000-2005) and is member of the Editorial Board of Automation in Construction journal (Elsevier). He was the coordinator of the Spanish Robotic Network (2005-2009) and of the Madrid Community universities' consortium RoboCity2030 on Service Robots (2006-2022), and was the Spanish representative in the European platform EUROP (2006-2008). He is currently member of the euRobotics Board of Directors (2015 -2021). He is also the Chairman of the Council for Science and Technology of the Community of Madrid (2016 - 2020) and the current President of the Spanish Association of Automatica - CEA (2018-2022).

He received several awards, among them the best book "Fundamentos de robotica" edited by McGraw-Hill (1988), best paper of the ISARC'2003 in Eindhoven (The Netherlands), IMSERSO´s Award 2004 for assistive robots research, the Industrial Robot journal Innovation Award of the Clawar'2005 in London (UK), Tucker-Hasegawa Award 2006 in Tokyo (Japan) for a major contribution in the field of Robotics & Automation in Construction and FUE´s Award 2014 for AIRBUS-UC3M Joint R&D Center.

He was the General-Chair of the following conferences: the IAARC International Symposium on Automation and Robotics in Construction (ISARC´1999), the IEEE-RAS Humanoids'2014 and the IEEE/JRS International Conference on Intelligent Robots and Systems (IROS'2018).