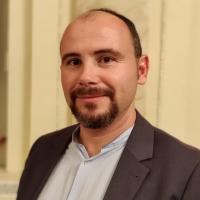 From 2006 to 2012, he worked at the natural and artificial Interaction Systems (n&aIS) group at the Albacete Research Institute of Informatics, Spain, focusing on computer vision techniques to detect human activities and frameworks for intelligent monitoring and activity interpretation.

From October 2012 to September 2013, he worked as a post-doctoral researcher at the Institute for Systems and Robotics (ISR), Instituto Superior Técnico (IST) of the Technical University of Lisbon (UTL), where he focused on networked robot systems, robotics and computer vision and intelligent control systems.

From September 2013 up to 2020, he worked as an Assistant Professor fellow at the RoboticsLab of the Universidad Carlos III de Madrid, where he teaches and researches on social robotics and computer visión techniques for Human-Robot Interaction. In 2020, he became Associate Professor.