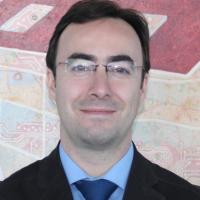 I got my Telecommunication Engineering degree at the "Escuela Tecnica Superior de Ingenieros de Telecomunicacion (ETSIT)" (2000), "Universidad Politecnica de Madrid (UPM)", including one year at the "Norwegian University of Science and Technology (NTNU)". And I got my PhD in "Automation and Robotics" at the "Escuela Tecnica Superior de Ingenieros Industriales (ETSII)", "Universidad Politecnica de Madrid (UPM)" (2010), including a stay in the EPFL".<br><br>
I have worked for the "University of Hawai'i (UH)" as a junior researcher in 2001. From 2003 I have been working and collaborating with the "Robotics and Cybernetics group" at the "Universidad Politecnica de Madrid (UPM)". From 2010 I have worked in the "Research Center for Smart Buildings and Energy Efficiency" (CeDInt) as a Senior Researcher. <br><br>
I have also worked for the telecom company "Comverse" as a System Engineer, for a "Technology / Smarthome" company called "Atelmedia" as a Technology Coordinator and Domotics Manager, and for AMETIC as an R&D consultant.<br><br>
From september 2011 I joined the UC3M as a Visiting Professor.
Telephone:
916245989
e-mail:
abrunete@ing.uc3m.es
Name:
Alberto
Surname:
Brunete
All publications on