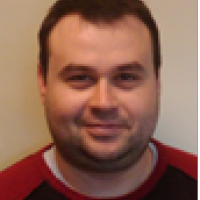 My name is Santiago Martínez de la Casa Díaz (quite long ;-)) and I work in different fields of robotics and automation in the Roboticslab Research Group from the Systems Engeneering and Automation Department.

Altough I actually belong to the Carlos III University, I started my studies on Industrial Engineering at the Alcala University. There, I received the degree on "Ingeniería Técnica Industrial. Esp. Electrónica y Automática". After that, I arrived to the Carlos III University of Madrid in 2000 and I started my career in this University. First of all, I completed my studies in Industrial Engineering in 2005 and then I started to work as researcher in the I.S.A. Department. More or less at the same time, I began the PhD Program on Electric, Electronics, and Industrial Automation Engineering. I received the M.Sc. Degree on Robotics and Automation in 2010 and, finally, I completed my Ph.D. on July 2012, with the Thesis titled "Human Inspired Humanoid Robot Control Architecture"

My research work and interests are related to:

From 2005 and during the next four years I was in charge of the 6FP EU Project ManuBuild related to automatization and robotization of construction processes. As well, I participated in the 6FP EU I3CON project in this field and other national projects like Tunconstruct, related to robotized tunnel maintenance.

I participated in the development of the climbing and assistive robot ASIBOT (AKA MATS). I was awarded in the "Proyecto Final de Carrera" prize from the "Colegio Oficial de Ingenieros Industriales de Madrid". As well, the ASIBOT development team received an Infanta Cristina Prize from the IMSERSO.

From 2009 I was in charge of the development of the humanoid robot TEO. The postural control of the robot was the subject of my Ph.D. Thesis.