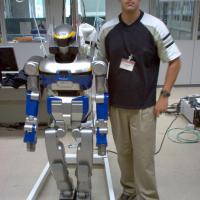 Nestor Eduardo Nava Rodríguez graduated in Mechanical Engineering at the University of Los Andes in 2003, studying the synthesis of Cam Mechanism. From 2003 to 2007 he carried out his PhD studies in Mechanism and Machine Science at DiMSAT Department -University of Cassino - developing a new low-cost easy-operation humanoid robot with a period of study at University of Malaga in Spain. Currently, he has a visiting profesor position at University Carlos III of Madrid. Nestor Eduardo Nava Rodríguez has a strong background on the analysis, synthesis and mechanical design of mechanisms and machines. He has developed formulations for the characterization of the workspace of serial manipulators. The obtained workspaces have been used for the design of new manipulators. He has worked on the synthesis, design and test of mechanical grippers and multi-finger mechanical hands. He has developed an optimisation algorithm for the mechanical design of an articulated robotic finger with 1 DOF. He elaborated the mechanical design of a new low-cost easy-operation humanoid robot by using cinematic and dynamic simulations of the robot operation. He is autor or co-autor of more than 30 papers in national and international conferences and journals.
Telephone:
+34 916248813
e-mail:
nnava@ing.uc3m.es
Name:
Nestor
Surname:
Eduardo Nava
All publications on