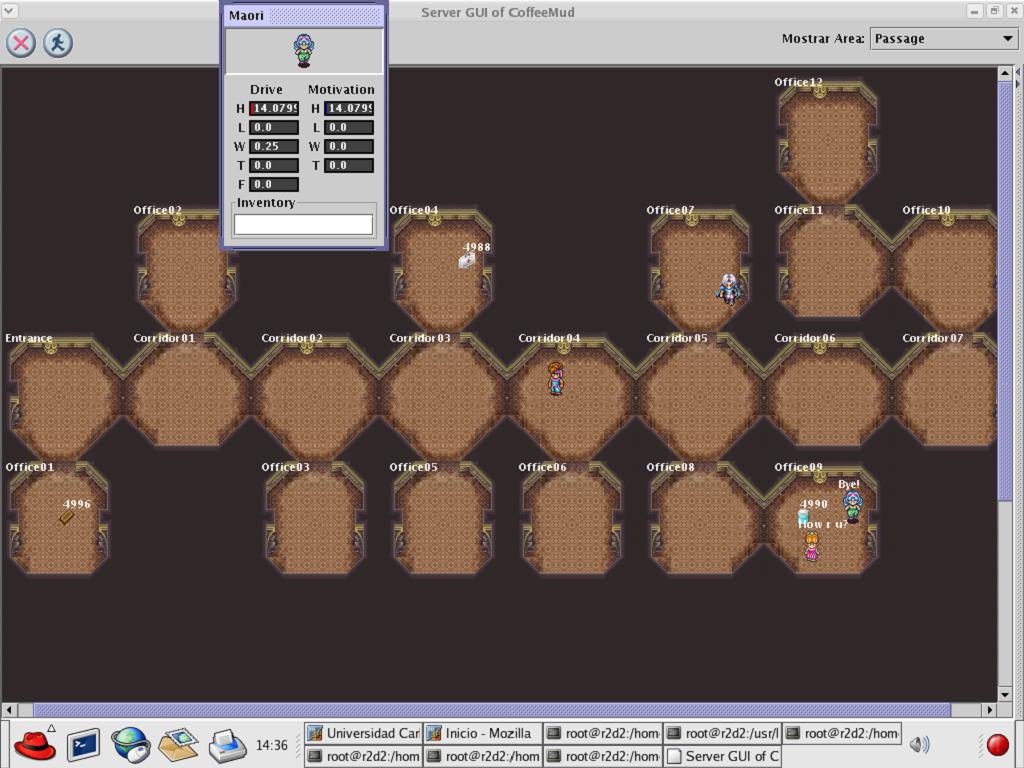 The main objective ofthis project is to design a decision making system, based onemotions and using unsupervised learning, for an autonomous and social robot.

This research is part of a large project which its main objective is to build an autonomous and social robot. The robot must learn to select the right behaviours in order to achieve its goals. The mechanisms involved in the decision making process are inspired on those used by humans and animals. Since it is a social robot, one of the required features would be the life-like appearance. The social aspect of the robot will be reflected in the fact that the human interaction is not going to be considered as a complement of the rest of functionalities of the robot, but as one of its basic features. For this kind of robots autonomy and emotions make them behave as if they were ''alive''. This feature would help people to think of them not as simple machines, but as real companions. For certain applications, a robot with its own personality is more attractive than another that simply executes the actions that it is programmed to do.

Many decision making architectures based on emotions have been implemented previously on robots. Most of them place emphasis on the external expression of the emotions (Breazeal,2002), (Fujita, 2001), (Shibata 1999). These robots have the possibility of expressing emotions through facial expressions and, sometimes, through their body gestures. In this case, emotions can be considered as a particular type of information, which is exchanged in the human-robot interaction. In nature, emotions have different purposes, and interaction is only one of them. But it has been proved that emotions have a fundamental role in human behaviour and social interaction. They also influence cognitive processes, particularly problem solving and decision making (Damasio, 1994). Emotions can also act as control and learning mechanisms (Fong, 2002). In this project, emotions are used for trying to imitate their natural function in learning processes and decision making.

Before the implementation of this system on a real robot, as a previous step, a decison making system has been developed using virtual agents, instead of robots. The agent lives in a virtual world where objects, needed to survive, and other agents exist. This agent must learn a policy of behaviour to survive, maintaining all his needs inside acceptable ranges. The policies establish a normative about what to do in each situation. This means that the agent must learn the right relation between states and actions. In this system the agent knows the properties of every object, i.e. the agent knows which actions can be executed with each object. What the agent does not know is which action is right in each situation. In order to carry out this learning process, the agent uses reinforcement learning algorithms.

In this reseach it is considered that the role each emotion plays, and how its associated mechanisms work are very specific. This implies that each emotion must be implemented on the robot/agent in a particular way. In this system the following emotions have been implemented:happiness, sadness and fear.

The emotions of happiness and sadness have been defined as the positive and negative variation of the wellbeing of the agent/robot. The wellbeing measures the degree of satisfaction of the drives or needs of the agent. It has been proved that, in order to learn a right policy of behaviour, the reinforcement function must be happiness and sadness. Therefore, these emotions are used as positive and negative rewards. Fear is presented from two points of view: to be afraid of executing risky actions, or to be afraid of being in a dangerous state. In this last case, fear is considered as a motivation, in accordance with other emotions theories.

We have proved that emotions are useful in the decision making system since happiness and sadness are used as positive and negative rewards. Therefore, these emotions are essential for the learning of policies. In relation to fear, when the agent uses fear to avoid risky actions, he improves his quality of life. Moreover, the use of Fear as a motivation makes the agent to learn to escape from dangerous states. Therefore, it has been proved the usefulness of the emotion fear.