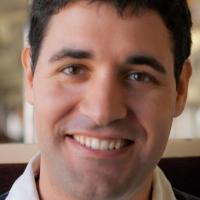 I am a PostDoc researcher with interests in the fields of Machine Learning, Human Robot Interaction (HRI), and Social Robotics. My PhD thesis, entitled "Interactive and Active Learning in Social Robots", studied how to mix Machine Learning and HRI to enable robots to learn better and faster from people.  Besides my PhD,  I hold an MSc in Robotics (Carlos III University of Madrid, 2010), an MSc in Computer Science and Technology with a specialization in Artificial Intelligence (Carlos III University of Madrid, 2011), and a BsC in Telecommunications with a specialization in Telematics (Technical University of Catalonia, 2006).

I am currently involved in the project MOnarCH, in which we lead the development of the Social Behaviors of a fleet of robots that operate in the paediatrics ward of an oncological hospital in Lisbon, Portugal. Our aim is to understand how robots should behave in realistic, complex and unstructured environments where robots and people share the same space during long periods of time.

Prior to joining the Roboticslab, in 2004 I joined to the Telematics Engineering Department of the Technical University of Catalonia focusing my research in ad-hoc wireless networks and protocols for emergency scenarios. Later on, in 2006, I joined to Telefónica I+D, the research branch of the Spanish Telefónica group, as an external R&D contractor. During this time, my work focused on Intelligent Transportation Systems in different European and Spanish projects: COM2REACT (European), MARTA and M:Vía (Spanish).

You can check my online profiles:

Besides, you can read some of the things I consider interesting in my Flipboard magazines: mostly robotics, Machine Learning, Data Science, and Python