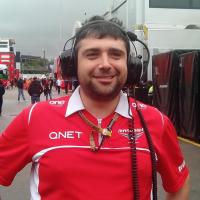 In Salerno I attended the high school at the "Liceo Scientifico Leonardo da Vinci", and then I received the Laurea (B.Sc.) degree and the Laurea Specialistica (M.Sc.) degree in Electronic Engineering on November 2002 and September 2005, respectively, from the Università degli Studi di Salerno. My final project was carried out at the Prisma Lab of the Università degli Studi di Napoli Federico II.

From August 2003 to January 2004, I have been living in Delft (The Netherlands), where I studied at the Delft University of Technology.

Finally, in 2006, I came to Madrid where I am delighted to live. Now I am working towards my PhD in the Department of Systems Engineering and Automation of the Universidad Carlos III de Madrid.

From February to April 2009 I have been living in Tsukuba (Japan), where I was a guest researcher at the Joint Japanese-French Robotics Laboratory.

In July 2009, I have been awarded the qualification of Master in Robotics and Automation by the Universidad Carlos III de Madrid.

My research interests include human-humanoid collaboration and interaction, and control of humanoid robots. During my PhD I have worked within the European Project ROBOT@CWE. Currently I am working with the humanoid robot HOAP-3.

The sound-track of my research comes from the experiments of PFM and BMS.

I am a "tifoso" of the football club Napoli and the Scuderia Ferrari in Formula One.

If you want to get some extra information about me, do not hesitate to send me an email.