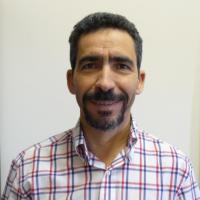 Associate Professor: Graduated in "Optics and Precision Mechanics" from Setif University, Algeria, and received the Ph.D. from the Mechanical Engineering Department of the University of Glasgow, Scotland, in 1996. After spending two year as a Postdoctoral Research Fellow at the Robotics Lab of the University Carlos III of Madrid, he was employed as a Lecturer in the Department of Systems Engineering and Automation. He was involved in the development of the climbing robot ROMA and contributed to the Future Home EU project as a local technical coordinator. Recently, he has been involved in the RISANAR project which deals with the autonomous navigation using computer vision and visual servoing techniques. He is currently the lead reseacher of the ASIROV and MEIGA-3 projects funded by the MICIN, and the HANDLE project funded by the EU within the 7th FP.

His general research interests include modelling, simulation and experimental validation of mechatronic systems with application to robotics, Man-Machine Interaction and Interfaces and subjects related to the Automation in the construction sector.

On the teaching level, he has been involved in teaching subjects such as Industrial Automation, CIM Laboratory, Programming and Computational Perception (computer vision).