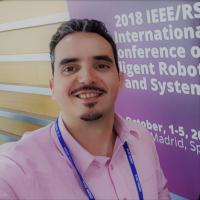 Alberto Jardón Huete (IEEE M’07-SM’13) Associate professor and Senior Researcher in the Department of Systems Engineering and Automation and Director of the Assistive Robotics Laboratory at the PCT-Leganés. He has recognised experience in the design and development of service robots and support systems. He has made a highly prolific scientific contribution, through 37 journals and more than 120 publications in top-level international conferences, as these are conferences recognised for their high quality, blind peer review, very low acceptance rate (in some cases less than 30%) and high number of citations received, such as ICRA, IROS, RSS, Humanoids,
ISARC, DRT4all, etc. Author of more than 30 invited papers, as well as 9 book chapters, with a large number of quotations. Inventor of 8 patents (one of which is in use). He has also participated in more than 90 projects, 25 of them being IP in the EU project on Algebraic Machine Learning ALMA H2020-EIC-FETPROACT-2019 and collaborating in another 9 EU projects. He participated in the development of two climbing robots and was a member of the team that developed ASIBOT (funded by the EU), a highly successful service robot to help the disabled. He was awarded the IMSERSO 2004 Second Prize, the CLAWAR 2005 Best Paper Award and the FUNDACION CASER 2013 R&D Prize. He is currently the project leader of the State Programme for Research, Development and Innovation Oriented to the Challenges of Society 2017 ROBOESPAS for automated spasticity evaluation and directs the Strategic Line of Research in Robots and Assistance Systems of the RoboticsLab group, leading the development of the Serious Games and Virtual Reality Programme for Rehabilitation and Diagnosis for the ASEPEYO Hospital in Sant Cugat (BA). He is a member of CEA-IFAC and of the IEEE Systems, Man, and Cybernetics Society and Robotics and Automation Society, both as Senior Member of the IEEE since 06/2013. Associate Professor since 07/2018, he has two recognised six-year periods of research and the third is active.