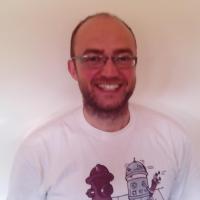 Welcome to my web site where you can find a short bio and my professional details.

Everything started in León on Jun 13th, 1982, in a sunny Sunday, during the inaugural ceremony of 1982 FIFA Football World Cup. The rest of the story comes next.

I studied Computer Engineering at University of León (2000-2005). Last year of my higher degree, I obtained an Erasmus grant for studying at Engineer School of Copenhagen, Denmark. Back at my home university, I realized my final degree project about robot navigation and I discovered the amazing world of robots.

On September 2008, I got my Master Degree in Robotics and Automation from Carlos III University of Madrid. My final project was titled "From teleoperation to tactil control on social robots".

In 2005, I started to work at Indra, the premier Information Technology company in Spain and a leading IT multinational. One a half years later, I got a grant from Spanish government to do my PhD Degree at Department of Systems Engineering and Automation of the Carlos III University of Madrid

In February 2009, I started to work as Teaching Assistant and, since 2013, I am an Assistant Professor. During these years, I've been involved on several courses, such as Computing Systems, Real Time Systems, Intelligent Control, Production Systems and Manufacturing, Integrated Manufacturing Systems, Industrial Automation, or Home and Building Automation.

In 2009 I spent 3 months in the Intelligent Robotics and Communication Laboratories, Japan, collaborating with Takayuki Kanda and Mashahiro Shiomi. We researched on the prediction of the trajectories of people while crossing each other for its application to social robots. This work was published in IROS 2010.

Next year my destination was the Adaptive Systems Research Group in the School of Computer Science, University of Hertfordshire, where I stayed for 4 months. My advisors during my stay were Farshid Amirabdolahian and Daniel Polani. We researched on robot's behavior adaptation to user's preferences and the results were published in IEEE-ROBIO 2011.

In 2013 I visited the Social Robotics Lab at Yale University, USA, during 4 months. In this period, I collaborated with Prof. Brian Scassellati and we investigated on the effects of form and motion on judgments of social robots’ animacy, likability, trustworthiness and unpleasantness. The results were published on the International Journal of Human-Computer Studies.