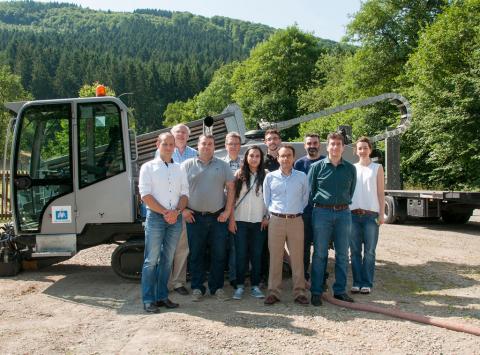 Over the past few years we have seen notable developments in ground (e.g. humanoids and rovers), aerial (e.g. drones) and underwater robotics (e.g. ROVs). Presently, however, we are on the verge of witnessing another defining technological development of high social and economic impact; BADGER, a new type of robot that will integrate a sensor and control unit able to perform autonomous underground navigation.

Let’s imagine for a moment that we want to connect two buildings standing on opposite sides of a main street, in a modern city, with a communication cable like fiber optic. It shouldn’t surprise us though, that despite being the most common applied solution, making trenches in these sort of operations, will inevitably lead to a disruption of the traffic flow, pedestrian inconvenience and environmental pollution.

The BADGER robot, however, will avoid all these problems through trenchless technology by making a small hole in the ground where the cable will be placed. Through the use of on-board sensors (e.g. georadar and encoders) and an intelligent control algorithm, the robot will autonomously navigate from the basement of one building to the other, avoiding collisions with gas and water pipes, metro tunnels, big rocks, etc.

Furthermore, the BADGER robot will not only be used for urban underground drilling but also for other numerous and valuable purposes that range from ground analysis prior to any underground construction, rescue-operations in natural or artificial disasters, planetary underground exploration, etc.

BADGER (RoBot for Autonomous UnDerGround Trenchless OpERations, Mapping and Navigation) is a three-year Horizon 2020 funded-project, with 3.7 M€ allocated for its development, and an international consortium composed of seven partners from five countries: Spain, Germany, Italy, Greece and the United Kingdom. The project coordinators, the University Carlos III of Madrid (UC3M) foresee the development of the first prototype during 2018, field tests starting in the first quarter of 2019 in Germany, and a commercial version of the system available in 2020. This is one of the eight selected projects, among 114 proposals (7% success rate), of the LEIT ICT-25-2016 Call.